You don’t need permission to record a conversation that you are party to but there are consequences that you may face later if you record conversations without permission.

I am regularly asked by employees who are facing trouble at work whether they can record their disciplinary meetings or conversations with their boss at work. The answer to this is that of course you can record a conversation you are party to. It is just the consequences of this that may be faced later if conversations are recorded without permission.

You can’t transcribe your own recordings, they have to be done independently. We often have to get a professional audio transcription company to produce the written transcriptions for us. The recordings therefore need to be of reasonable quality and the recording should be clear enough to distinguish different participants talking in the recording. It costs around $75 per hour of transcription time, and typically speaking, one hour of recording can take four hours to transcribe where there are two to three participants in a recording. This is something that our client will have to pay for.

Coming up with recordings that others were not previously made aware of is not always a good look. While audio recordings can be helpful to prove what happened in a meeting and what was said, it is not always necessary to use them.

The evidential standard is the balance of probabilities, which is whether the evidence established that facts alleged by a party or witness were more likely than not to be true. If there is little dispute as to what was said or if there are credibility issues that we can use to our advantage then I prefer to attack it from that angle to prove what happened rather than to rely on recordings.

The adverse consequences of recording without permission

There have been decisions where employees have recorded conversations without their employer knowing have gone against the employee later.

One was an unsuccessful bid to be reinstated after having been dismissed. In Milham v Chief Executive of Waikato Institute of Technology [2016] NZERA Auckland 259, the conversation being recorded had taken a path about rebuilding trust in the employment relationship. It was found that this would have been an opportunity for the employee to disclose that they were recording. The Authority found that if there was trust in the relationship it was severely damaged when the employee’s manager discovered the employee had recorded the meeting without the manager’s knowledge. This went against the practicability of reinstatement.

Here is what you need to do. You are either going to be using a recording app on your phone or a recording device. My advice is that you have two recorders, so if you are going to a disciplinary meeting, you have one recorder secretly recording in your pocket or bag, and when you enter the meeting you present your other recorder and politely ask if you can record. If your employer declines your request then at least you are already recording it and as I mentioned above, we don’t have to use the recording.

There are Apps for recording phone calls as well. For that we recommend Cube ACR. These kind of Apps may require a monthly or yearly subscription but they are typically very cheap.

We write for the Deals on Wheels magazine. Read our full article: 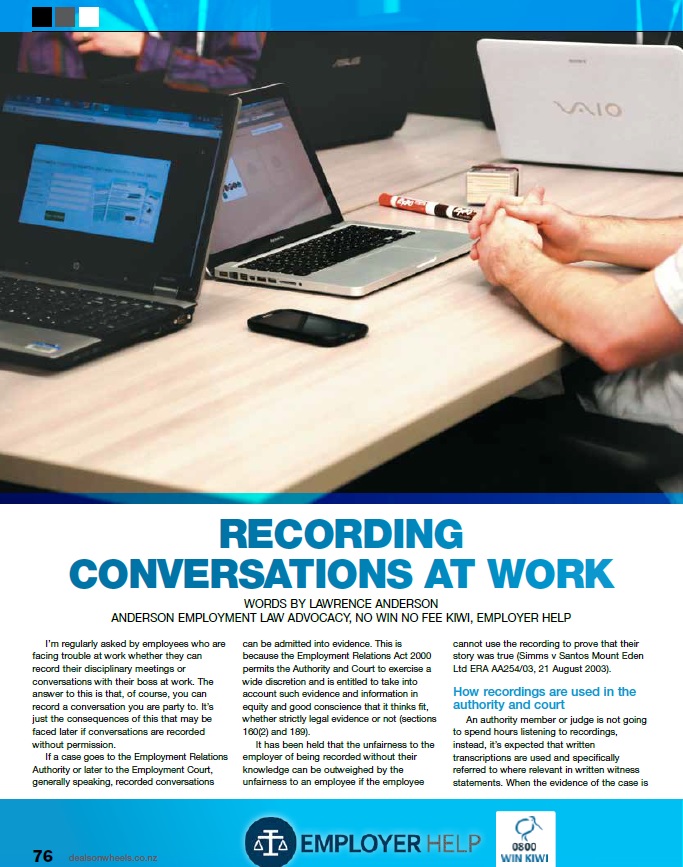