Where there is confusion or ambiguity of the identity of the employer the legal test requires an objective observation of the employment relationship at its outset with knowledge of all relevant communications between employer and employee.

Who is the employer?

Often our clients can be faced with having to decide whether a claim is against an individual or a company. This is quite often because of tardiness in the way the client was originally offered the job, particularly when there is no written employment agreement and when it is not clear who or what entity was paying the client during their employment.

The general test requires an objective observation of the employment relationship at its outset with knowledge of all relevant communications between the parties.

Emails, text messages and generally what ever representations are said to have been made at the time are helpful to be able to answer this question practically.

If there is a good case to make claims against an individual being personally liable as being an employer, the employer will be liable to pay whatever is awarded to the employee and an employer placing their company into liquidation and/or letting their company being struck off the companies office register will not avoid this liability if we can establish personal liability.

Holding an individual as being the employer, a recent win

I have just won a case for a client where I had to apply the tests to establish that an individual was personally liable as an employer, this was Cotton v Gosling and Ors [2022] NZERA 90.

Mr Cotton (C) applied for a job and began work undertaking a firewood recovery, splitting, selling and delivery operation that was based out of the Red Stag Restaurant in Fairlie, South Canterbury. The business was called Ignite Firewood Temuka there was no registered company for this business.

C worked for about three weeks up until which point he was dismissed from his employment following having raised issues about not having been paid his wages in full. There was no written employment agreement to identify officially who or what entity his employer was. It was suggested and later argued by the Respondent’s to this matter that Mr Ralston (R), a worker that would at times supervise C in his work, was C’s employer.

In response to a personal grievance letter raised for C, Gosling Solutions Limited fronted as the employer that purported to defend the grievance and wage arrears claims through its representative, Employsure.

The Employment Relations Authority found that C was the employer personally for a number of reasons. The job advertisement was a personal Facebook posting of G. C met G to discuss the job in doing firewood work, and clearly the Red Stag Restaurant was an unrelated business. No written employment agreement was provided to C that would identify a company being the employer. A business card was provided to C with G’s name on it and the Ignite Firewood Temuka logo. C supplied G with his IRD number and bank account details. G personally controlled and financed the firewood operation and put out to the local community that it was his operation given the impression that he was a sole trader. G took on the responsibility of paying C personally from his own bank account. C was not made aware of the existence of Gosling Solutions Limited at the time that C was engaged or during his short period of employment. G conceded in his evidence during the Authority’s investigation meeting that R’s role was only to supervise C.

After having been declared the true employer, when the Authority investigated C’s claims, G was found to have unjustifiably dismissed C, and failed to pay his wages in full. G was ordered to pay in total around $20,000 personally, meanwhile G’s company will soon be struck off the companies register for failing to file an annual return.

As illustrated in this case, G could have avoided personal liability if he had taken steps from the outset of employment to make it clear that a company was the employer, and not risk having been found to be personally liable as an employer.

Small employers, contractors, tradies, if you operate a small business and you are seeking labour, this is my simple advice for you if you want to take on any staff: 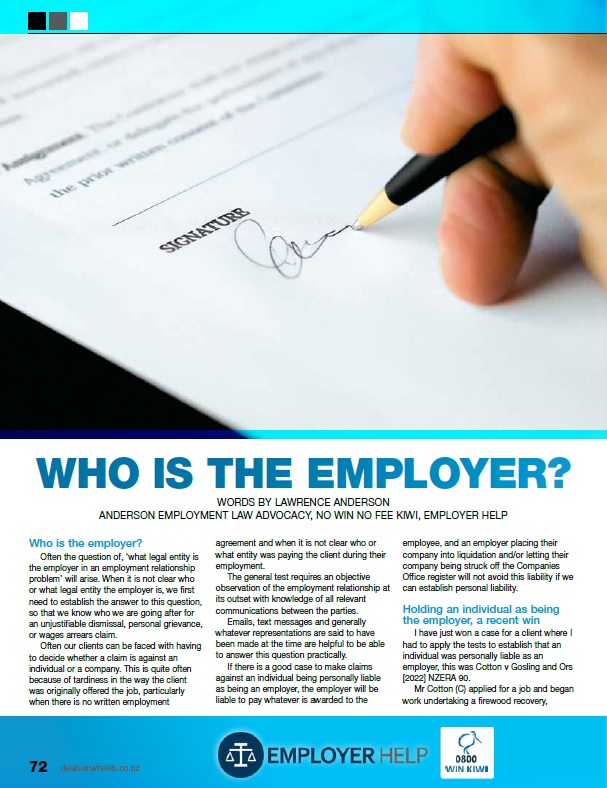