There are important steps to be taken before filing in the Employment Relations Authority and attending an Investigation Meeting. The first stages can be fast tracked by filing an application without having first raised a personal grievance letter.

After dismissal occurs, and where an unjustifiable dismissal claim is to be taken, the employee and their personal grievance is at the bottom of the employer’s list of priorities. Sometimes they think ignoring it will make it go away.

It is wishful thinking to expect to receive a reasonable financial settlement early particularly when the employee has been marched forthwith out of the business, at times without any notice, for whatever reason – that is what we challenge, the substantive and procedural justification of the dismissal.

From our end, the first step involves the writing of a letter to the employer setting out the employee’s personal grievance for unjustifiable dismissal. Often we request further information as part of that notification process, and if the employer provides that information early then that is helpful.

What goes in a personal grievance letter

The basic facts of what gave rise to the employment relationship problem is a starting point, and set out in a chronological order. What will follow is a simple explanation of what the applicable laws are and how they apply to the particular case. That is how the claim is set out.

What comes next is setting out the what remedies our client is seeking to their losses, such as lost wages and distress compensation. But that does not need to be precisely quantified at the early stages.

I reference statute and Court caselaw and how it applies to the particular case. If the case goes to the Employment Relations Authority or is challenged after that to the Employment Court, the letter will be included in the documentary evidence.

With all the Court cases I have dealt with so far, I am sure that the judge would have read the personal grievance letter and be wondering why the hell we are in court over such a simple case that the employer is challenging from our win in the Employment Relations Authority. When we have won in the Court, it is great to be able to say “I told you so” to the employer’s lawyer when we are sorting out costs.

In recent times writing letters is now proving to be a waste of time. We suspect has a lot to do with the current economic climate, the effects of Covid-19 and the economic recession that we are now faced with, it seems that as a consequence of all this, employers are starting to ignore us when we make initial contact and when raising claims by a letter. We have to go to plan B.

An Employment Relations Authority Application has all the same ingredients that we put into a personal grievance letter. The only real difference is that the employer is then served the application, which is called a “Statement of Problem”, and the employer is given notice to file a response, called a “Statement in Reply” within 14 calendar days of receipt of the Statement of Problem.

Once the employer has lodged their Statement in Reply, the parties are often in most cases directed to attempt mediation and are expected to attend in good faith in an attempt to resolve the employment relationship problem.

Talking about more recent times again, it is now, and now more than ever that employers will not make a reasonable or realistic offer to resolve the problem.

What can also be frustrating is when we a mediator pressures our client to accept a low-ball settlement offer, when clearly taking the case further will yield a higher return where the case has good merit.

There really should not be any pressure in mediation. The client still has a right to justice and should not be pressured to take a low settlement to appeal to an employer who actually has the most to gain with the withdrawal of further litigation or a government organisation who is trying to reduce costs.

More and more we are having to extricate our client from unreasonable pressure to settle from someone that does not take cases to the Authority or Court, nor has a good insight to all the facets of the case. It is not all bad, but it is notable that the employment mediation forum is becoming more difficult to get early results.

We only take on cases were we believe on a reasonable basis that we will have success in the Authority or court for our client.

The wait times are now reducing. After Covid there was a tsunami of cases in the Authority and that meant that our cases would take over a year to be heard. But now we are being offered investigation meeting dates sooner than we ever have. That means that employers that come up against us are going to have to start worrying sooner rather than later about what it will cost to put up a fight.

At the moment I am just of the view that we don’t waste any time writing letters anymore, file the proceeding and go and win.

Either party can challenge an Employment Relations Authority decision within 28 days of its ruling. If our client has won in the Authority but their former employer challenges that decision to the Court, if our client’s defence has merit, we will defend it on a “no win, no fee” basis. 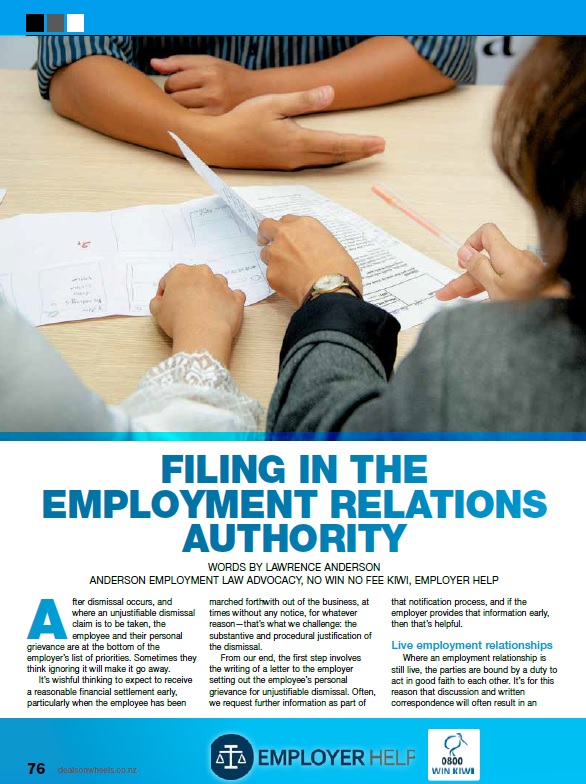