The courts have established further case law surrounding constructive dismissal such as:

While we are advising that employees should not resign and should let the boss fire them so that we can take an actual (not constructive) unfair dismissal case against the employer, there are situations where a resignation and a constructive dismissal claim would be the better option to take. Proper and timely advice is recommended before taking action.

If you are contemplating resignation because of unsatisfactory treatment or a situation has led you to lose trust and confidence in your employer, talk to us first before resigning.
Do not resign until you speak to us first.

Whether its a disciplinary meeting, a workplace investigation, or an issue that an employer has with an employee, if the employer is proposing termination of employment but at the last minute the employer is offering the employee to resign and that the resignation would be accepted instead of dismissal, we say, do not resign, follow our advice.

If you resign you are giving up your employment rights to raise a personal grievance for unfair dismissal.

Involve us, and you will be in a much better position for us to achieve a great result for you.

If settlement is not achieved because of the employer's refusal to negotiate, we then take the case further to the Employment Relations Authority (the ERA).

We write for the Deals on Wheels magazine. Read our full article here: If you are about to be dismissed, don't resign 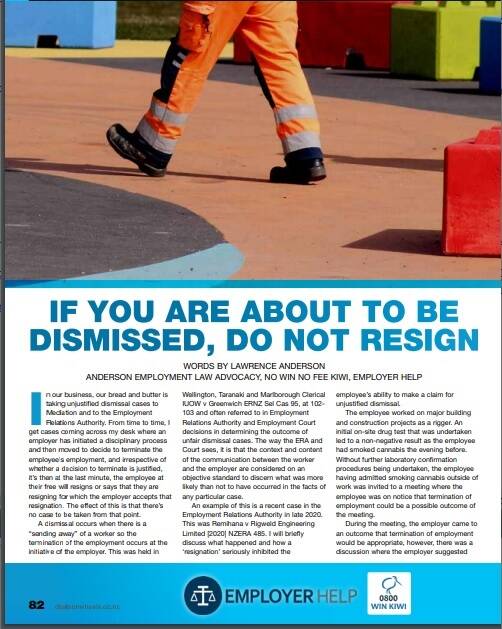 Download File: If you are going to be dismissed, don't resign