Consumption of alcohol and bad behaviour at Christmas functions is not uncommon. Employment Relations Authority decisions involving Christmas party incidents that have led to disciplinary action up to and including dismissal.

An altercation after the Christmas party, unfair suspension and unfair dismissal

S worked for South Wairarapa Auto Services Limited until she was dismissed by her employer. Her role was office duties and truck cleaning from November 1999 to the end of December 2000. Her employer held a Christmas function on 22 December 2000, S attended that function.

When her partner arrived to collect her at about 9 PM her partner was confronted by a work colleague of S about some tyres that he had obtained that had not been paid for. It resulted in her partner having laid a complaint of assault with the Police.

Upon return to work, S was stood down from her employment because the work atmosphere was tense. The other employee that assaulted S's partner was not disciplined. The disparity of treatment rendered the stand down unjustifiable.

The communications as for the standdown and pending decision to dismiss S resulted in a misunderstanding, such that S having not responded within the employer's perceived timeframe the employer subsequently declared that S had abandoned her employment. This was found by the Authority to amount to being an unjustifiable dismissal in the circumstances.

I am only reading off the headnote, which is difficultly worded. After 1 December 2004 a number of employees were dismissed for smoking marijuana at a staff Christmas function. K was a manager and the designated host of the function who although did not even have a puff of weed, however still did not stop the others from smoking.

Prior to dismissal K had spoken to the other employees assuring them they would be fine and could only expect a warning. They were not told of the range of possibilities open to employer and not given an opportunity to comment on those.

Following dismissal the senior manager investigating the matter became aware of new information. A witness had stated that K had been present when marijuana produced and said it was okay to smoke it. Levels of intoxication were also not adequately investigated.

A builder is dry humped on site, genitally flicked at a Christmas party, then denied a fishing trip

C worked for his employer as a builder's labourer in property construction in housing and wider commercial areas. There was an incident on 19 October 2007 at a building site where the company's managing director approached C from behind and rubbed his genital area against C's bottom. This is otherwise known as dry humping. C immediately took evasive action and was shocked. It was later that the managing director claimed to have amnesia and could not recollect the incident.

On 14 December 2007 a Christmas function was held. Here C was subjected to another behaviour he described as genital flicking. Apparently this was a drinking game where the object is to make a participant spill their drink, the difference being that C was not a willing participant. C was also subject to further unsatisfactory sexual remarks by his colleagues.

C then engaged solicitors that wrote to the company seeking commitment from his employer that these behaviours would cease forthwith. In response to this, the company relied on this being endemic behaviour to the building industry and the nature of the complaints were said to make the employment relationship difficult, and advised that C needs to “harden up”. C was later refused from participating in the company's January 2008 fishing trip as the company declared it could not guarantee C's physical safety.

The Authority had no hesitation in reaching the conclusion that Mr C has suffered disadvantage as a consequence of a number of unjustified actions of the employer. C was awarded compensation for hurt and humiliation was ordered to the amount of $12,500; plus wages lost by Mr C; and that the employer was directed to develop, with the assistance of outside expertise, a sexual harassment policy, and for the employer to assertively discourage inappropriate behaviour in the workplace.

After the Christmas party: On the piss, justifiably dismissed

R was a labourer for around 20 years. On Friday 19 December 2008 he was scheduled to work the night shift. A private Christmas function (not the company's) was organized by his colleagues. R attended, became worse for drink and did not attend work that evening.

It was normally assumed by the employer that an absence was noted by default as a sick day. R's absence without notification was later followed up when next attending work on Monday 22 December 2008. His manager Mr Dixon asked on more than one occasion whether R was sick, which R had stated that he was, but when pressed, R came forward with the truth that he was not sick and that he had been on the piss.

At conclusion of a disciplinary meeting, R was dismissed. The rationale being that R was initially untruthful about the reason for his absence and the impact his absence had on the crew. Normally there would have been three workers to run the Foundry during the shift, and R having known that another worker was on leave, R's absence left only one crewman which then had a significant adverse impact on the operation of the plant. Not having notified his employer amplified the culpability of R's actions.

The Authority upheld the decision to dismiss and declared it as being justifiable. It said that the fact that R thought it was appropriate to go out “on the piss” on a night when he should have been working must go to the root of the trust and confidence that ought to be maintained between parties to an employment relationship.

We write for the Deals on Wheels magazine. Read our full article: 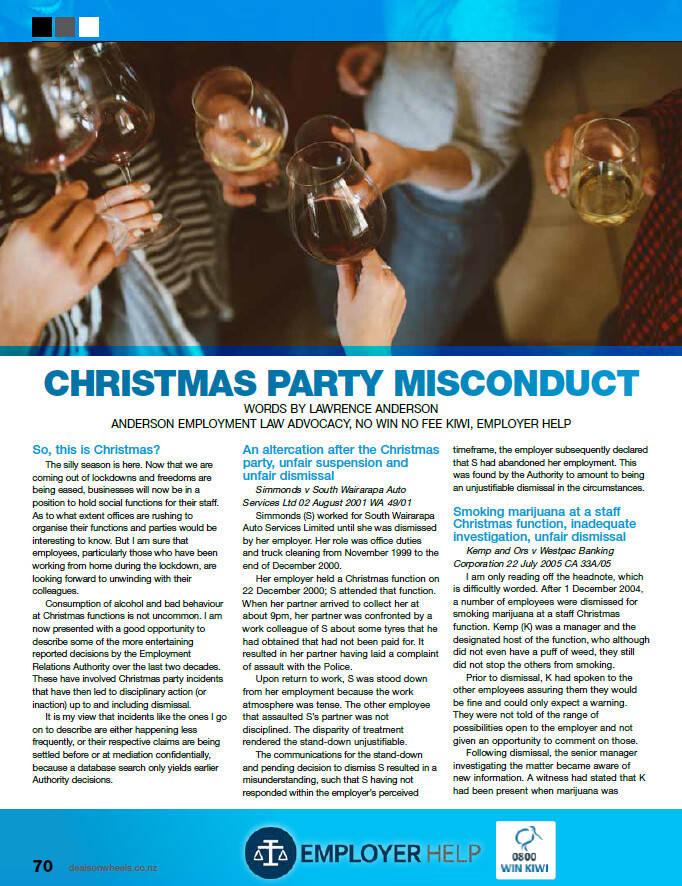