Employment Advocates and No Win No Fee

Are unregulated employment advocates causing "severe emotional distress"?
RNZ Article: unregulated-employment-advocates-causing-severe-emotional-distress
We do not agree with such a wild and unsubstantiated proposition.

There are not many opportunities for quick and easy work for employment lawyers and advocates. The competition to get new clients via Google Ads is high and advertising is expensive.

As a consequence of this there are advocates that do not provide their clients with a written contract or terms of engagement when starting a case.

Not providing terms of engagement that sets out fees avoids an advocate having to deal with a client’s apprehension about what they are agreeing to. But where a client’s case does not appear to yield quick and easy money that advocate may disappear.

If there is to be regulation of advocates then providing written terms for the client to agree to should be a requirement. But are voluntarily regulated advocates doing the needful? We would hope so.

When there has been no written engagement, was a personal grievance raised for the client within the 90 day statutory time limit? And for all claims? If not, then the client might be able to seek leave from the Employment Relations Authority to raise it out of time due to this failure. But without being able to show that a written engagement was entered into, would leave be granted so easily?

Proper engagement between client and advocate should include mention of the statutory time limits.

Another player on Google Ads for the last few years has been the Ministry of Business, Innovation and Employment’s Early Resolution Service. This is where a MBIE mediator attempts to resolve the client’s problem with their employer directly.

Often the mediator takes a significant amount of time to get back to the client, closely approaching the 90 day time limit that a personal grievance should be raised within, and if there is no resolution the client is only advised that they can file their case in the Employment Relations Authority.

In every case we have seen handled by the early resolution team, the client has never been made to understand that a personal grievance must be raised within 90 days; the mediator won’t raise it for them and the mediator cannot do that because as a mediator impartiality must be maintained, and their communications are confidential in terms of s 148 of the Act (as this is considered to be a quick confidential mediation process) which would likely make the seeking of leave to raise a grievance out of time impossible for the client.

Should the early resolution mediators get a signature from the client to confirm that the statutory limitation periods have been explained and are understood? That seems like it would be a reasonable step that should be taken.

The purpose of providing a client with a contract to agree to a “no win, no fee” contract is to set out details such as the scope of the work to be performed; how fees are charged; how the contract can be terminated by either party; what happens on termination; overdue accounts procedures; a complaints procedure; and so on.

The termination provisions are important to both lawyers and advocates such that there are clear terms setting out fees to be payable for work that has been done if the client unreasonably terminates the engagement. In other words, if the client does not give the advocate an opportunity to “win” their case, there is a fee for the work performed up to termination.

In MacDonald v TKR Properties Ltd [2017] NZERA Auckland 240 the Authority reassessed an advocates cost on a rate of $250 describing that as still relatively generous. With inflation, $300 plus GST per hour is not unreasonable rate for a trained and experienced advocate.

Advocates don’t get paid unless the client gets paid, or there is a settlement where fees are paid to the advocate directly. It is the advocates that have to do almost all of the work. This includes caselaw research, written communications, writing and filing pleadings, memoranda, submissions, talking to the client sometimes for hours at a time to iron out all of the facts particularly when having to write the client’s witness statement for them. Negotiating a settlement based on the merits of a case and legal principles that apply may not result until a substantial amount of work is undertaken. There is often travel costs, printing and other disbursements.

What about charging a percentage? One third has become the normal market rate. But it is still important to take into account how much time has been spent on a case. Divide the one third by the number of hours spent and that would reveal the hourly rate.

Should an hourly rate have been charged instead when an advocate has spent many hours on the case, including for example when the employer has challenged the ERA decision to the Employment Court?

Most settlements achieved involve the advocate being paid directly by the employer through a s 149 settlement agreement, for tax deductibility reasons. If that eventuates then the client not only signs the settlement to agree to what the advocate will be paid but a mediator will also confirm the client’s understanding of the effect of the settlement. There is an opportunity to not agree and to say “No, I am not happy”.

It is now claimed that advocates who have charged fees that have been disputed by a client are causing them “severe emotional distress”. How? Simply by making efforts to recover unpaid fees through debt collection and an adjudication process in the Disputes Tribunal? That is a strange proposition when considering that dispute resolution processes have been a part of human society for thousands of years.

Where an invoice is in dispute the debt collection agencies have a process to follow and there are limits on what can be done until the dispute is decided on by the Disputes Tribunal. If a default was loaded on a debtor’s credit file but the debtor raises a legitimate dispute the default will be removed.

Either party can submit the dispute to the Disputes Tribunal. Reasonable charges are an important aspect of consumer protection already and the Tribunal applies these rules when making its findings.

Where a client feels that they are in the right and/or that an invoice is unreasonable, then the Disputes Tribunal process involves impartiality, the application of the consumer laws, and a fair opportunity for the client to be heard.

Could it be that the “severe emotional distress” has its genesis in the client feeling guilty having known that, for example, their situation involved having unreasonably terminated an engagement after having used the advocate that has performed a significant amount of work for them? Or is it because the client did not understand from the outset what they were agreeing to in the engagement? Has the client been provided with terms of engagement to agree to at all?

Managing a case can involve a lot of work and advocates greatly appreciate client commitment when working on a “no win, no fee” basis. Advocates perform a service by assisting those that don’t have the means to pay a lawyer when they are seeking access to justice. 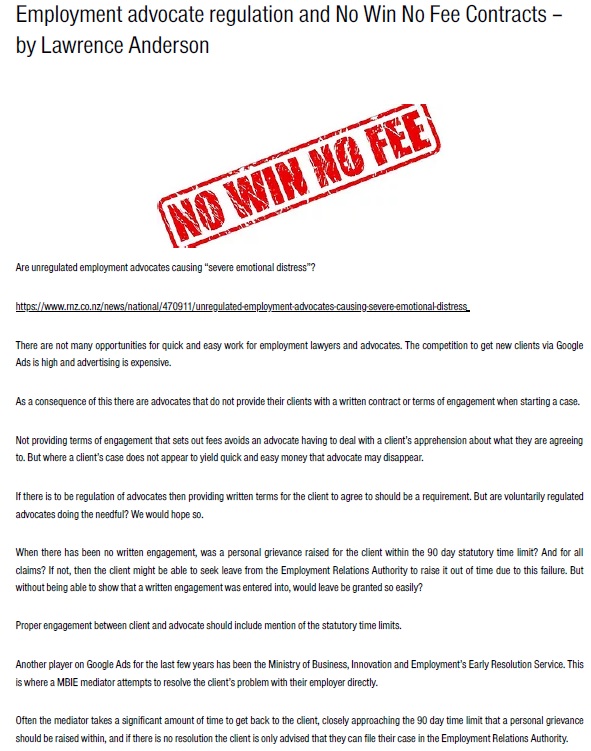